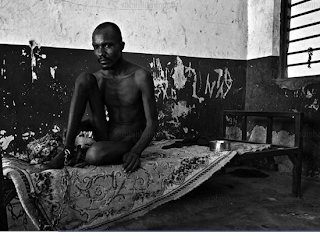 I only wanted to write about the things I was interested in.  Travel, food, music, cycling...I could go on but basically, the things that make me happy.  I'm not sure I have the courage or the skill to report on subjects that need bringing to the wider attention of the world.  However, I'm grateful that those journalists are out there and I've even been privileged to meet one or two of them.  I recently got an email from a photojournalist called Robin Hammond that left me feeling humbled and in truth, a little ashamed of my own writing efforts.  Robin took the picture you're looking at on this page, of a mentally ill Somali man chained to his bed.  If you've read this far, I urge you to take 6 minutes out of your day to watch his film here.  I can't think of many worse forms of existence than being mentally ill in an impoverished country.  Give what you can and help Robin reach his goal.
Posted by Unknown at 09:36