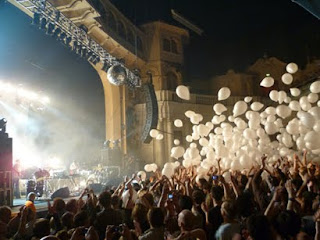 If frontman James Murphy follows through on his stated intention to make LCD’s next album the last, the world will be poorer for the loss of a band that works hard at pulling off the best kind of gig: a cross between a party with your best mates and a rave (complete with a fog of dry ice and lasers). It’s Saturday night and it seems everyone’s been invited: 40-somethings mix with 20-somethings and no one feels weird.  Given it’s essentially a farewell tour, what we get is a greatest hits show, from the first single ‘Losing My Edge’ to ‘Daft Punk is Playing at My House’ through to the new single ‘Drunk Girls’.  You can draw a musical evolutionary line back from LCD to two other influential New York bands.   Lyrically they’re close to Talking Heads, musically closer to disco-era Blondie.

From the opening ‘Get Innocuous’, drummer Pat Mahoney powers everything, keeping time as precisely and tirelessly as a machine.  It’s immensely satisfying dance music that builds and builds, adding layers of rhythms until you find yourself locked into a chugging groove before its all broken down again and the next track starts up. ‘Yr City’s a Sucker’ is one such example.  Given Murphy’s love of cowbells and various other members of the band hammering bongos or yet more drums, at times it smacks of the relentless funk that was Go-go.
In a recent interview with The Guardian, Murphy said he succeeds at making ‘dumb body music’ but the biggest cheer of the night went up for the opening bars of  ‘Someone Great’.  It’s one of the greatest songs ever written about heartbreak and loss, about carrying on with the trivial minutiae of life (‘there’s all the work that needs to be done…songs to be finished’) when you’re dying inside.  If any doubt still exists, it proves that dance music can be as much about the heart as the feet.  Murphy sings it mockingly at first, as if it doesn’t matter, before the obvious love of the song’s sentiment by the crowd obliges him to put his heart into it.   A 4 song encore ends with ‘New York, I Love You but You’re Bringing Me Down’ which comes over like a cross between a lovely lament from the drunk at the end of the bar and a musical show tune.  White balloons then tumble from the ceiling like it’s closing time at Studio 54 and with that, they’re off.
Posted by Unknown at 22:15 No comments: 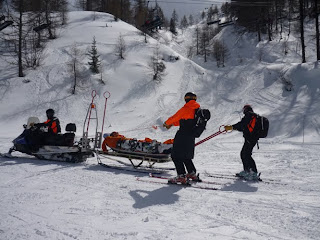 ACL is one of those initialisms which is referred to in uneasy tones by snowboarders, as if the existence of the thought of it will have an influence over the course of events on the mountain.  The snap I heard from my knee as my board wedged in a thick pile of snow and my body gave into inertia was conclusive enough for me.  Grands Montets at Argentiere (near Chamonix) had been blessed with the best snowfall of at least a month and riding through it had been beautiful until that noise.  The only silver lining was the experience of being rescued.  Able pisteurs strapped me into a sledge and took me down to a point on the mountain where I was hooked onto the back of a skiddoo.  Then it was onto the cablecar for the final leg down to ground level.  As they saw me waiting to get loaded in, boarders and skiers alike looked at me with my leg in a splint before grimacing and turning away, not wanting to let the black worm of the thought that it might happen to them eat away at their brains.

Two weeks and two days later, an MRI scan has confirmed it: my anterior cruciate ligament is ruptured.  It's not until something happens to one of them that you realise how much you use your legs.  For a fortnight now there's been no more cycling into the city, no more running for a bus and nothing so easy as just nipping to the local for a swift pint.  Pints I can still do but 'nipping' is definitely out.  Exiting the front door of the building (once I've reached it) brings Groundhog Day.  Along with my first intake of the best air of the day, there is inevitably a smug looking cyclist with the sun on his or her face, enjoying the peaceful streets of Notting Hill as salt is  slowly rubbed into my wound.  The GP thinks it will mean surgery but is sending me off to the knee doc just to make sure.  Meantime I'm trying not to think about what is ahead of me.  Some say six months before I'm back to how I was but one friend wrote to say that he's just at the point of being signed off by the doctor 11 months later.  In the meantime there is no choice: the patient must learn patience.

As a footnote to this, I'm glad I booked insurance.  In Euros, the rescue cost 360, the doc 150, the leg brace and drugs 90.  The insurance company also booked out three seats for me on the plane to put my leg up on and a car the other end that delivered me to my door.  I've previously had a rant about insurance companies not being fit for purpose so respect where its due: thank you Flexicover.
Posted by Unknown at 07:21 No comments: