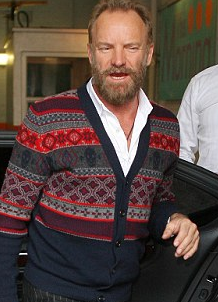 Sting has long been a figure of fun for journalists, though a lot of the criticism has been mean spirited.  After all, don’t the rainforests need saving even if it takes a yoga mad millionaire tantric sex practitioner to advocate it?  The Department of Health would no doubt applaud his commitment to a healthy body and frankly whatever he gets up to within his mansion walls with Trudie is up to him.  (I’m going to have to go and do some serious web-surfing to get that image out of my head.) The Police were a great pop band but their former lead singer’s latest incarnation as a sort of wandering hairy minstrel is pretentiousness on a grand scale that is likely to invoke more mockery from journalists, starting with this one.

‘If On a Winter Night’ is his latest project, one inspired by, you guessed it, Winter, which Sting tells us (on a video promo on his website – you have to see it) ‘is the season of the imagination, of mystery and storytelling’.  There he is, wandering through the snow in a massive coat and boats with his dog, stroking his Grizzly Adams beard, looking for all the world like he’s a man weighed down by the great questions of life, before the video cuts to him singing in a candlelit room accompanied by his guitarist.  He is swathed in a chunky knit cardigan, singing a verse as if reciting a Shakespearean sonnet.  A further cut reveals the assembled musicians around a table playing 17th century compositions by Henry Purcell on harps and mandolins while candles flicker and the ghost of punk wanders noiselessly through the room, no doubt wishing it could die all over again.

The promotional tour that he’s embarked on to flog this latest work is ruthless in targeting the middle England demographic. He was on the Alan Titchmarsh show yesterday for folk’s sake.  The One Show must also have been surprised to get him, but not as surprised as the bassist he paid to accompany him on Later…Live the other night.  The salary to note ratio can only have been good, given that he only had to play three of them.  Foo Fighters started up their glorious racket over the dying notes, breaking the ethereal spell Sting had been working hard to conjure.  This surely must have been down to the time restrictions of the live show and not because Dave Grohl was as bored listening to him droning on about snow and squalls as the rest of us.

But it’s the look he’s sporting that is most irritating.  It’s as if he has grown the beard to appear more sage and (perhaps in a tantric sense) more potent.  His facial hair seems to be not so much the result of the boredom of shaving but to cement his new incarnation as philosopher.  His muse is the season, his focus pastoral.  This image is further cemented by his new found love for a certain style of cardigan – the sort of thing an out of touch Aunt would give you for Christmas. It’s unlikely, even given his 58 years, that he is starting to feel the cold; too many yogic breathing exercises at hand to warm the body.   All the plaid and wool seems intended to say, I am a simple man at heart, I wander the country and am moved to sing of the glories of nature. It’ll be hairshirts next. Sure he’s aging and his changing interests are bound to result in new musical directions. The irony is he seemed so much less ridiculous when he was singing about prostitutes and walking on the moon.

Email ThisBlogThis!Share to TwitterShare to FacebookShare to Pinterest
Labels: If On A Winter Night, Sting, Sting's Beard, The Police