Beets and Limes and Waistlines

It feels like I'm getting somewhere with this writing lark - the South London Press are publishing this on Friday 13th November.  I'm superstitious in a good way now...going to start walking under ladders and stuff.  Anyway, here's the feature:

When I turn up to meet Rosie and Ellie, the force behind Salad Club, a supper club in South London, they’re not there.  ‘Sorry’ says Tom, Ellie’s tall boyfriend, looking a bit sheepish ‘They’re out getting some food.’. Of course they are. 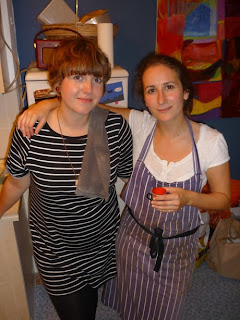 Salad Club is one of a new breed of ‘supper clubs’ that have sprung up this year.  It’s a similar experience to visiting a restaurant, the difference being that you go to someone’s home, you don’t have a choice of what to eat and there’s no official prices, just a suggested donation of £25 which Ellie & Rosie tell me most people are happy to pay.  The two have been friends for 6 years since meeting at University and host the evening in Ellie’s front room high above Brixton market, the sounds of which are bubbling through the open window when I arrive. As we speak , they busy themselves peeling and coring apples for the dessert that evening: Tarte Tatin.

Salad Club was born out of a regular weekly meeting for an exercise class. ‘Soca aerobics it was’ recalls Rosie, ‘the most aggressive class set to carnival music, a teacher that would kill us every week and we could hardly talk or walk after, all we could muster was a salad.  But good salads – we were obviously starving afterwards.  We wanted something healthy and virtuous and we started experimenting, getting adventurous with the ingredients and to show off to each other and then we jokingly started referring to the whole experience as Salad Club and that’s where it came from.  We don’t just serve salad at Salad Club though’, she adds, emphatically.

So how did they go from meeting up for the gym and salad to inviting 16 people into Ellie’s house for 4 course dinners?  Ellie, a web Editor by day, says it was down to embracing new technology and a visit to one of the earliest pop up supper clubs as the inspiration for their own. ‘The blog was the start. Rosie and I initially used it to share with each other what we were cooking. We are both keen writers as well as Rosie being a photographer so the blog was a great place for us to put our ideas down. Rosie takes up the story, ‘Fatefully, we got some coverage for the blog in the Guardian on the same day that we went to the Secret Ingredient, a supper club in Dalston.  We thought ‘we could do this….’ 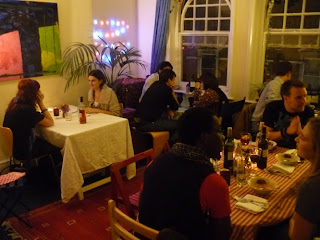 The coverage came because they responded to a tweet from the Guardian on the website Twitter, asking for good breakfast recipes.  Rosie sent in a shot of asparagus wrapped in bacon for soldiers, which was printed with a link to the blog.  The supper club was started at the same time so ‘we timed the opening of the restaurant perfectly without knowing it.’ says Ellie.

The buzz about Salad Club has resulted in there now being around 400 people on the waiting list and it seems that people are happy to wait their turn. ‘Some have been on the list since June.’ Says Rosie.  Most are really happy to wait, we tell them we can take them in December or January…’

Both Ellie and Rosie hold down full time jobs as well as doing Salad Club so how long do they think that can last? ‘The dream is to make our living from this.’ admits Ellie.  ‘Salad Club makes a small profit but if we added up our hourly rate it would be less than minimum wage.’  ‘About a pound an hour!’ Rosie says, laughing. ‘Our ideal would be cooking 1 private supper as well as 1 or 2 secret suppers or collaborations a week (more of which later).  It’s difficult to know when the best time is to stop (by which they mean quit their current jobs) and take a risk.  We feel so confidently about what we want to do and we have found something that we love doing. The time is really right with people very interested in food right now, especially home made food’.

Another attraction of running Salad Club has been the enjoyment of being in control. ‘We both feel that we have been motivated by being our own bosses.  From the beginning to the end everything is ours.’ Says Ellie.  Rosie, warming to the theme, expands on this. ‘At the moment we line the pockets of already quite wealthy men and it’s very empowering to have complete control over the finances and the food and the daily schedule, absolutely everything.’ 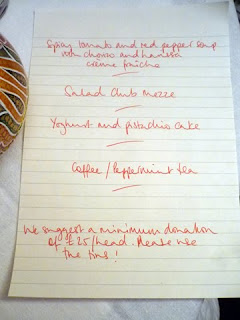 Rosie also notes that the partnership serves to motivate them. ‘ If there was just one of us it would be very easy to think ‘I cant be bothered this weekend’. Everything is now planned until Christmas but Ellie has got permission to go dancing one weekend in November!’

It seems obvious to me that the natural development would be to one day run their own restaurant but they disagree. ‘The bureaucracy and red tape would take the spirit out of it.  We’re not interested in that.’ Rosie says,  ‘It’s about getting people in and feeding them.  Things will change, Ellie is not going to live here forever so the space we have is going to change but we will always do it somehow.  We’ll either make it smaller or we will go to peoples houses offering tailor made menus for private clients.’ So the future might be in catering?  Ellie screws her nose up at the word ‘When I think of caterers I always think of vol-au-vents’.  Rosie agrees. ‘We make food that people want to dig into.’  Though they might not like the word, they do concede that they like getting booked to cook for people ‘We did a group of 12 recently.  It was a surprise birthday party for this guys wife; we spent all day in his lovely kitchen.’

Like the unusual nature of their own enterprise they also like the thought of collaborating on other original events.  They tell me they will soon be collaborating with a furniture designer friend, which will be like visiting one of the restaurant/shop hybrids that are on the rise. ‘Not only do you eat the food, but you can buy the table it sits on, should it take your fancy.’  They’ve also thought about it themselves. ‘We’d like to get into having a ‘buyable restaurant’ where we can sell things like the crockery we use – we find a lot of interesting things at car boot sales.’

With so much to do I wonder if the working relationship has affected their friendship.  Do they still have a laugh? ‘Yep, we’re off for pizza in a bit, that’s always good!’ says Rosie.  Ellie thinks about it ‘I usually get really stressed late afternoon…’ And you don’t fight if you have a bit of a testing moment? Rosie dismisses the idea.  ‘We just sit down and have a beer!’  Despite the work they have to put in, it’s evident that their creation gives them a lot of joy. ‘The best bit is when everyone has left and all the plates are empty and we’re buzzing off the compliments’ Ellie says,  ‘People have left really happy and then we sit down, have a drink and stop and think about how it went and how much we liked everyone.’  Rosie nods her head. ‘At that moment we feel like we ‘ve made some really good friends.  For that moment you feel close to them.  You’ve made the food that they’ve eaten and they’ve loved it.  Much better than meeting someone in a bar…’