Boozing in the Corridors of Power

I went for a drink at the Houses of Parliament last night. To get into the Palace of Westminster you go through a security check at Portcullis House opposite and then you go back under the road and into the Houses. It'd be a great place for a game of Hide and Seek; there are 1100 rooms, 100 staircases and 3 miles of corridors.  A friend who works there had invited me and she told me a couple of stories about getting lost in its labyrinthine layout.  As we looked about we speculated about secret passageways that surely must exist in there. It only adds to the air of intrigue about the whole place. Firstly, the amount of security makes you feel important as you walk around. The place is crawling with coppers. Secondly, to state the bleeding obvious, the people in this building govern everything that we do.  I know they work for us but often it feels like we have to do what they tell us to do, which brings me to the third point: it feels a bit like school. The older boys are condescending to the younger ones and have more privileges apparently. It's almost like a caste system. The colour and design of your security pass determines the access that you have and this includes the bars. Even in the canteen there is a section that is reserved for those with real clout (the Lords presumably). I guess they don't want to have to mix with the researchers, cooks and cleaners that have to be there so that the machine runs effectively.

We had access to the Strangers Bar. It was only as recently as 1994 that a modernisation committee recommended that visitors were no longer referred to as 'strangers'. The bar was like a small pub from the 70's with a few water-colours and caricatures dotted around the walls.  It felt like people should be smoking in there. There were two TV screens: one showing Sky Sports and the other informing imbibers who was currently speaking in the House and which bill they were proposing should anyone having a drink want to dash back to the chamber and cast their vote. Outside the bar was the terrace that you can see from the other side of the Thames with the green and white striped marquees that seem so at odds with the majestic exterior. We tried it for a while before the rain started and it felt really surreal having a Guinness right by those famous walls that are forever illuminated by orange lighting. Strangely, it made me think of the time that FHM projected a naked Gail Porter onto the side. 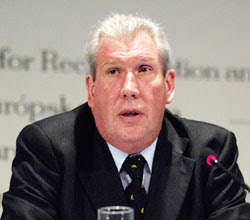 Disappointingly I didn't spot any brown envelopes bursting with £50 notes being passed between people surreptitiously in the bar.  Pleasingly though, there were a few old duffers drinking pints of bitter, one of whom looked a bit like Rupert Murdoch, but his suit wasn't up to much so it probably wasn't him.  The Strangers Bar seemed very much the right environment for them to be in.  It was only after we'd left that my drinking companion asked me if I had recognised the bloke sitting to my right.  Finally, the whiff of scandal that I'd hoped for.  It was Elliott Morley, who is probably going to be the first MP to face police investigation into his expenses claims for a mortgage that he'd already paid off.  He put it down to a 'genuine mistake' but was suspended by Labour at the time and won't be standing next time round. Despite paying back the £16000 he mistakenly put through expenses, he still had enough for a drink.  Which is nice.
Posted by Unknown at 21:38