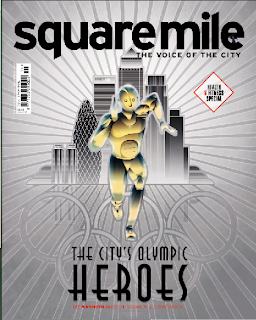 I've been pretty happy this week.  Getting your name on the cover of a magazine will do that for you (it's the small stuff you can't read in the red ink).  It feels like another step in the right direction - if someone had told me that I'd get a cover byline a couple of years ago when I started writing it would certainly have instilled some belief.

The feature came to me the way I hope all commissions come my way in the future.  Square Mile's Editor emailed me with the idea and asked me if I'd like to write it.  Wouldn't that be good, if you didn't actually have to pitch ideas to Editors and they came to you to put the feature together?  That's happened twice to me recently so karmically, I need to get some ideas to people.  Can't see them continuing to give me work if I'm not giving something back.

One of the most stimulating things about writing is the people it introduces you to.  The two people I interviewed for the City Olympic Heroes feature had very different personalities but they both exuded a clarity of purpose that, if I'm honest, I don't think I have.  As potential competitors at the London 2012 Olympics, both Phil Wicks (marathon) and Nick Brothers (hockey) know that a unique achievement is within their grasp and that they have the talent to get it.  The only difference between them is that Nick, as part of a team, is dependent on his team mates to perform as well as he no doubt will; Phil, as a marathon runner, only has to rely on himself.  A place in the history books, not to mention the love of a nation, awaits them.  You can read the feature here.
Posted by Unknown at 16:37