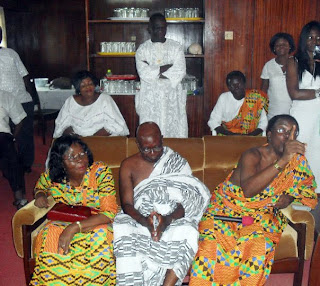 It was impossible to relax until this thing was done. In Ghana, there's a lot of hanging around and time weighs heavy on your mind. To make our engagement official in the eyes of her family, my fiance Karen had arranged for us to have a traditional 'knocking' ceremony, in which the groom (me) formally asks for the bride's hand in marriage in front of her family, friends and well wishers. For some reason, I hadn't done the thing that I normally do with anything I have no knowledge of: Google it. Karen had asked her Auntie Gladys if we could do something to mark the occasion as we were travelling to Ghana to celebrate her Grandmother's 100th birthday. Given that was a such a momentous landmark, I think I didn't expect our little ritual to be anything other than a small token gesture.
In any case, it had been underplayed. The information I'd received was that I had to imitate the sound of knocking on a wooden door ('ko-koh-ko'), state that I had seen 'a beautiful flower' and that I had come to pluck that flower, offering whisky and schnapps as compensation for the loss of the bloom. With all the knocking and plucking, my biggest worry was fluffing my lines. Since we'd arrived in Accra, it soon became evident that a couple of bottles of booze wasn't going to cut it. Each day, Auntie Gladys would ask us if we had brought another thing, 'Have you bought the cloth?', 'How much money are you putting in?', 'Have you got the engagement bible?' We had spoken to her before we travelled and she hadn't mentioned any of this - I began to suspect that the old girl was testing me. The goods were to be gathered in a suitcase and presented on the day of the 'knocking'.
Heathrow is a big airport right? Bound to have schnapps there. Uh uh. Have you ever tried getting schnapps in Accra? Even a savvy friend of the family that agreed to try and help us out had to squeeze his 4WD through several teeming streets while chickens and children disappeared scarily beneath the horizon of his bonnet before mercifully appearing unscathed grinning (the kids, not the chooks) on the other side. The third shop eventually unearthed a bottle housed in a box that looked like it had mildew, but it would do. Getting hold of an 'engagement' bible (who knew they existed?) proved similarly elusive. Our driver scratched his head as he headed up and down Oxford Street as the shops were putting up their shutters, stopping at a party shop (which turned out to be a supermarket) and a chemist before we realised he didnt have a clue where to find one either. In the end a cousin who'd grown up in the city and was getting married a couple of weeks later came through for us when we'd arrived in Abetifi, 3 hours drive North of Accra in the mountains. The village had a church at its highest point, a few tarmac roads dotted with potholes and shops in shacks. Best of all were the cool breezes that made the climate more comfortable than in Accra.
When we arrived for the 100th birthday celebrations, no one seemed to exactly know when the knocking would be. After two days of celebrations on the Friday and Saturday of the weekend, no more mention was made of it. We were asked to turn up to church on Sunday but it was so full we headed back to the guest-house and lolled around for another hour. This was when my butterflies started fluttering. Each successive person would say something like 'Today's the day eh?' with a sharp intake of breath and a pitying grin. After numerous photo-calls with all of the 148 attending relatives of Mama (as the grandmother was known), I was taken aside by Aunty Ophelia, who said, 'Dont worry; I'm on your side.' It was on. Another car scooped me up and onto a life changing moment. 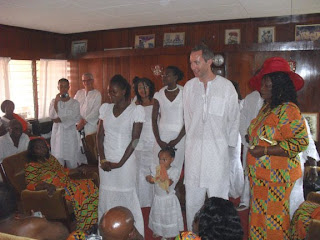 Arriving to a forecourt filled with a couple of hundred people on either side, I was shepherded past them into a wood panelled room with family portraits on the walls, as family members filed in behind me. 'They're going to hide Karen. You have to convince the brothers to help you find her', somebody said to me as we went in. Mischief was evidently big in Ghana. It had been a hot day anyway, but suddenly it felt like there was no air in this room My palms secreted a glaze of sweat. At the front of the room sat Uncle Alex, the eldest son, with Aunty Gladys and Aunty Joanna alongside him, all of them resplendent in kente robes of bright orange. To my right sat Karen's Mum, Cecilia. As the service was mostly conducted in the Twe, a Ghanian language I didnt speak, Aunty Ophelia was to represent me. A call from outside the room came of 'A-yeh!' (basically, 'Get out of the way!') and she marched in, accompanied by other female members of the family. Barbara, Karen's sister, was put in front of the trio and asked if she was free to marry me. 'No Uncle, I'm not free. I'm not Karen!', she answered to hoots of laughter and whatever the Ghanian version of 'wa-hey' is. After the chuckling had died down, Karen was brought forward and asked the same question; when it was determined that she was free to marry, Uncle Alex wanted to see the goods. A hitherto unseen bottle of wine was presented, then the schnapps, followed by the whisky. The crowd heckled – it wasn't enough. They wanted to see the cash. The larger denomination notes we'd included in our suitcase were absent, in their place Ophelia held up a fistful of 2 Cedi notes (just less than a £1 each). A bunch were proferred to my future brother in law, Mike. Up to that point in the trip, we'd been getting on great. His face suddenly took on that of a mechanic about to fleece you. Aunty Ophelia offered a few more notes with a brow like thunder and mindful of that brow, Mike consented, at which point a rowdy cheer went up. My nerves had all gone by this point: this was pure theatre.
As the brothers had consented, so the family was happy. Uncle Alex then related a story of a man that was looking for a plantain. He went into the field and turned the plantains this way and that, inspecting them in turn until he found one that met with his satisfaction. Once he had found the perfect plantain, related Uncle Alex with a wag of his finger, there was no need to keep checking out the other plantains. 'You are now accepted into our family' he said, with a broad grin as the applause and wolf whistles exploded. I'd been waiting for my turn. Assuming it was expected of me to say something and with reference to the flower I had now plucked, I thanked him for his words of advice and assured him that I would do my best to take care of this 'rare and exquisite flower'. More hoots and clapping. After being told who everyone in the room was and greeting them with a handshake or a kiss, we were lead into the courtyard and presented to the crowd with Uncle Alex at the microphone. It's probably the closest I'm going to get to feeling like a celebrity.
After that the music kicked in and the caterers removed the metal covers from the food, letting spicy smells quickly mesmerise the people into forming a queue . Seated at the front of the dancefloor like Charles and Camilla when they visit a foreign country, we were congratulated by person after person, the most memorable one being the MC, complete with a triple size bottle of Scotch and shot glasses. Though I'd come to mark our engagement, I'd ended up a married man (in Ghana at least). My new wife and I took to the dusty courtyard floor and fell in with the rhythm of everyone else, our smiles never fading as the party continued into the night.
Posted by Unknown at 16:34