I inadvertently got married since I last posted.  My partner and I has asked to do something to mark our engagement with her family before we travelled to Ghana a couple of weeks back.  We were going out there to join in the celebrations for her grandmother's 100th birthday.  Bit of an eye-opener for me in a couple of ways - I'd never been to West Africa before and I got to meet more members of the family I was going to marry into than a person usually does.   Mama Ntim (the grandmother) had 11 kids, all of whom have since spawned their own.  I lost count of the amount of cousins I was introduced to but, when you meet your in-laws, you don't expect to meet around 150 of them in the same sitting.  Nor did I expect to have offer compensation for their loss of Karen to me in the form of whisky, schnapps, money, cloth and an 'engagement' bible.  That's another story (one I'll post here another time), but suffice to say there were lots of firsts. 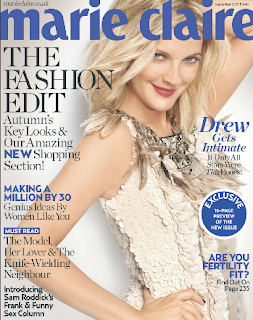 Arriving back to Heathrow, I spotted my first coverline, on Marie Claire's September issue.   A PR who had helped me out with the Company story I wrote (thanks Sade) told me of a case study she had.  Jasmia Robinson had been on Britain's Next Top Model and her career was on the up until her neighbour stabbed her boyfriend in the stairwell of the building where Jasmia lived.  Her boyfriend survived, thankfully.  It was a challenging interview given the sensitivity of the tale - would it be awful for Jasmia to live through the story again as she related it to me for example?  Her PR assured me that she wanted to tell it as an example to others that you can live through terrible experiences and come out the other side to carry on with your life.  She's brave - the story is on p133 of the September issue of Marie Claire.

The interviews with Jasmia went well and for the most part, she was very strong.  The copy got submitted and I felt like I'd fulfilled the brief.  As I read the magazine in Heathrow, the story bore only a passing resemblance to what I'd written though.  It had been sensationalised - there were words in the story that are not on the tape.    I've asked for feedback from Marie Claire but haven't had anything yet.  It made me feel firstly that I'd let Jasmia (and Sade, the PR) down, that I'd misrepresented them, although I got a mail today saying they were happy with it.   Less importantly, it made me feel like the writing must have been a load of shit for them to change it so much.  My conclusion was that I'm still young in my writing career and I have to experience a lot of different things before I know the kind of writing I want to concentrate on.  The truth was that I needed the money (and the byline) for that story, but perhaps I should have put my morals first.  It can be a grubby business sometimes.
Posted by Unknown at 19:13