He Said, She Said

One thing I have never done on this blog is big up another writer that I like so it's about time I addressed that.  If you've never read The He Said She Said Review before you should if only because people, it's January.  The cold breeze of winter is blowing up your trouser leg and you're considering long johns even though you previously thought they were for old people and the very fact that you're considering wearing them has got you worrying that you're middle aged already and you haven't even done anything with your life yet.  That combined with the lack of light in the day and not being able to go out because you're skint after Christmas and because its buggering freezing (did I mention the weather?) is getting you down.  You need a laugh.  Therefore you need to read Chris and Emily's gig reviews. 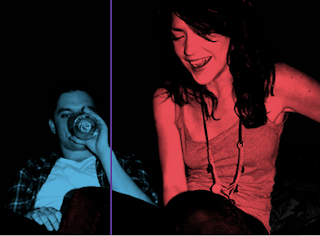 They shouldn't be funny.  Basically the two of them seem to get pissed, muck about, not really know what to say to the bands and occasionally have a fight.  We've all done that and usually when we relate that sort of thing to our friends, they do a sort of fake guffaw or maybe a nose-blow of a laugh and pretend like its amusing in a supportive kind of way.  Realising your hilarious story probably only seemed hilarious because you were inebriated, you change the subject and move on.  So I don't know why even though most of their posts are pretty similar, I still want to go back and read each new one.  I think its a bit like watching the Royle family - I'm laughing because its holding up a mirror to what is familiar.  Just like I've sat around a telly with my family and, if I 'd thought about it later, it would have made me smile, so hesaidshesaid feels like I've done that or I've seen people doing that and plain and simple, human behaviour can be very funny.  Treat yourself and hit the link.
Posted by Unknown at 22:47

Email ThisBlogThis!Share to TwitterShare to FacebookShare to Pinterest
Labels: he said she said, January, royle family