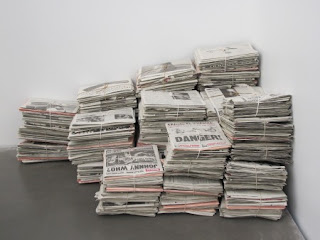 I've just finished reading Peter Preston (@PJPrest) in the Observer giving an overview of the direction in which newspapers seem to be going.  For those of us that work in the industry, the figures make for depressing reading.  To crib from his feature (which you can read here) the Times and Sunday Times is losing somewhere between £11m and £60m, Lebedev's Independent and Standard company is losing £27.4m and the Guardian and Observer are losing £44m.  Those figures, surely,  are unsustainable.  How much longer will the titles will be allowed to exist?  If they were a football team, they'd already be finished.

The obvious solution should be online.   Advertising on the web accounts for £1 of every £4 spent, so why aren't the websites of these papers bringing money in?   The only figure cited by Mr Preston is the £14.7m the Guardian makes, but if they're still losing as much as stated above, it's not the financial salve they're probably hoping for.  All the papers are looking at the Times experiment, being the only title charging to access their content and journalists should all be hoping that it's a success as it will keep them in jobs.  Surfers will be reluctant as they've evolved expecting to get everything for free.  Really the papers should have collaborated; my guess is that even the most devoted reader of the Times might have gone elsewhere when the paywall was introduced.  Particularly given the short amount of time they spend reading online - Peter cites 15 minutes, compared to the 40 they would spend with a newspaper.

Peter's answer is niche sites (his example being Politico) and I think he might have a point.  If you're particularly interested in one type of content, it makes sense.  I will often browse the online Arts & Ents or Life & Style sections of the papers, skipping between three titles.  If they were all in one place, I'd hit that site more frequently.  The other solution has to be 'freemium' titles.  If the London institution (and now free newspaper) Evening Standard is losing money, how come free papers Shortlist and Stylist can prosper?
Posted by Unknown at 21:46