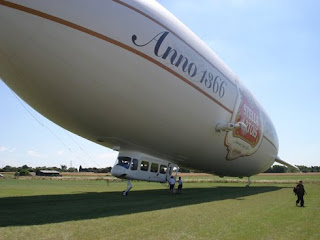 You've got to love England in the summertime, right?  Absolute smasher of a day this sunny Sunday and I've woken up to my first national newspaper byline (page 79 of the Sunday Express today).  It's the travel feature about the Peak District that I wrote about in the original 'Peaks and Troughs' post on this blog.  It's a good feeling - feels like I'm getting somewhere.  More importantly it part answers the question that this blog was set up to answer and that is, if only for a few days, I can write for a living.  There certainly needs to be many more commissions for it to be a viable proposition though.  Two of those a week could keep me pretty well.

The story behind it is that I met Duncan Craig, the Express Deputy Travel Editor a couple of years back when we were both invited to go up in the Stella airship.  Duncan, being a proper journalist and someone who was in a position to give them a plug, had a perfect right to be there.  Not sure why the PRs had thought I should be: I was a Deputy Picture Editor.  So, bit of a blag really.  Anyway, we got on, swapped business cards and when I decided to see if I could write, I mailed him asking for ten minutes of his time.  Surprisingly, given how busy he is, he said yes.  After some good advice, I added him to the mailing list for the blog and I think it might have worked as a regular reminder to his inbox that I was still here waiting for an opportunity, which he eventually gave me.  The other major factor in getting a full page in the Express was attending Peter Carty's Travel Writing Workshop.  Now, enough with the laptop.  Sunny English days like this are rare, so I'm off out.
Posted by Unknown at 11:33