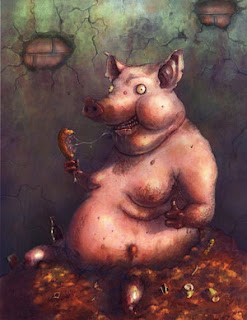 After weeks of posting examples of writing on this blog, I thought it was about time I returned to the original question. Make sense wouldn’t it? Currently the answer is, I’m starting to. There have now been 4 commissions. Might seem like a small number to you but to me, each one is a little episode of joy. It means someone out there thinks I’m good enough at writing to pay me for it. I’ve thought of working hacks who might see a couple of commissions a week and take it for granted and I hope I never get like that. What’s better than doing something you really like and getting paid for it? I'm not trying to come across like one of the X-factor contestants who, in a desperate attempt for votes when they’re plainly shit, plead into the camera ‘THIS IS MY LIFE’. Writing isn’t like that for me, it’s just the only thing I’ve ever done that I really liked.

To anyone that’s reading this and is wondering how I got the commissions, I have to say the mere existence of this blog has helped. The blog goes out to a mailing list of media contacts that I’ve built up in the last year or so. Ridiculously, since I’m not normally superstitious, I’m wary of naming names before the words are actually in print (plenty of time for minds to change and features to get killed). Suffice to say that the man who offered up commission number 4 is from a national newspaper and is on the mailing list. Don’t worry I’ll be shouting it from the treetops when its in the newsagents. My guess is that the continuous hammering of his inbox with alerts to this blog kept me present in his mind. When he found something he could let a relative novice have a go at, I got the call. So now I’m up here in the Peak District being a travel writer. I’m staying in a cottage that was a former pigsty and I’m happy as the former inhabitants would have been rolling around in their own muck.
Posted by Unknown at 15:29

Email ThisBlogThis!Share to TwitterShare to FacebookShare to Pinterest
Labels: Pigs, Writing for a Living, X-Factor